Latin America needs to take action to help Venezuela resolve its political crisis or risk the country turning into a «sea of blood,» Peruvian President Pedro Pablo Kuczynski said on Monday, warning that a wave of refugees could hit neighboring Colombia.

Kuczynski said during a conference in Madrid that Venezuelan President Nicolas Maduro should let humanitarian aid enter his oil-producing but economically ailing country.

Dozens of people have been killed in protests against Maduro’s socialist government since April.

«If nothing is done, we are going to end up with a sea full of blood,» said Kuczynski, a former banker who has taken the lead among Latin American leaders in criticizing Maduro. Read more

Counsel to Venezuela opposition leader Leopoldo López have today filed an Urgent Appeal to Dr. Diego García-Sayán, UN Special Rapporteur on the Independence of Judges and Lawyers requesting his immediate intervention with the Government of Venezuela.  In their detailed complaint, Jared Genser and Juan Carlos Gutierrez, state:

Throughout the trial and ongoing arbitrary detention of Mr. López, the Government of Venezuela has failed to observe minimum international norms of due process. The Government’s 64-day prohibition of Mr. López’s right to communicate with counsel further exacerbates this ongoing situation of injustice. Urgent Action is now necessary, with the gravity of Mr. López’s situation continuing to increase amidst rapid destabilization of the Maduro regime. Read more

Stop being soft on our despot, Venezuela’s bishops tell Francis

AN UNEXPECTED item popped up on the agenda of Pope Francis in recent days. Although the meeting did not feature in his pre-announced weekly schedule, on June 8th it became known that he had squeezed in some time to confer with six bishops from Venezuela, one of the most troubled places in the historically Catholic world.

The visitors declared afterwards that they had stressed their absolute loyalty to the pontiff, and that he in turn had expressed his “full trust” in them. Neither statement is a platitude. There is massive contention over the role which the church has played and could play in halting a lurch towards civil war and humanitarian disaster in Venezuela, which is overwhelmingly Catholic.

The country’s bishops have consistently challenged abuses of human rights and democratic procedure by the regimes of the late Hugo Chávez and his successor Nicolás Maduro. Read more

A 17-year-old Venezuelan protester died in ferocious clashes between security forces and protesters in Caracas on Wednesday, taking the death toll from unrest since April to at least 66.

The government said Neomar Lander died when a homemade mortar exploded in his hands while hundreds of youths faced off with National Guard troops in the Venezuelan capital.

Opposition lawmakers, however, said he was killed by a tear gas cannister fired straight at him. The state prosecutor’s office announced a probe, without giving details.

Venezuela Musicians Rise Up After Violist, 18, Is Killed at Protest

Armando Cañizales left his viola at home that day.

Eighteen and talented, he was a success story of Venezuela’s state-run music program for the poor. But he decided it was time to join the street protests against the government that had supported his career.

As teenagers throwing rocks retreated from a line of soldiers, Mr. Cañizales moved forward alone. He said nothing as he advanced, arms outstretched, palms facing up.

Then the fatal shots rang out.

“When he fell, I didn’t even know it was him,” said William Hernández, 19, a friend and fellow musician a short distance from Mr. Cañizales during the protests last month. He never expected Mr. Cañizales, who had expressed no political views to him, to be at the march. The viola had seemed to be the only thing on his mind. Read more

Inside Venezuela: The Socialist Haven on the Brink of Total Collapse

Even at Bogotá airport in Colombia, the closest major capital city to Venezuela, a look of curiosity comes over the faces of staff when you tell them you are heading to Caracas.

Entry visas into Venezuela remain fairly accessible, although journalists are not allowed without a special visa. Although I claimed I was there as a tourist, this seemed far-fetched even to the likely pro-government immigration authorities. “What is the real motive of your visit?” the officer asked me. “Seeing my girlfriend,” I replied.

She smiled. “Welcome to Venezuela.”

As you travel down from Simon Bolívar International Airport into the city center, the difference between Caracas and Bogotá – formerly one of the world’s major drug war battlegrounds – is stark.Read more 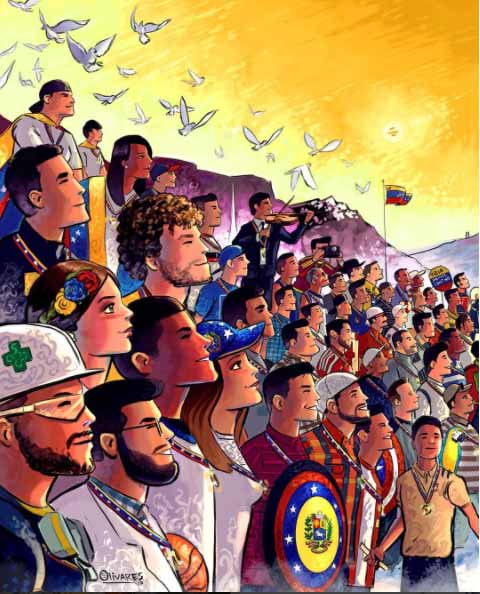 After a year in a Venezuelan jail, former missionary from Utah is losing hope

For almost a year, Joshua Holt, a 25-year-old former Mormon missionary from Utah, has been languishing in a Caracas prison hoping to have his day in court.

He was arrested on June 30, 2016, on charges of hiding two automatic rifles and a hand grenade at the home he was sharing with his new bride, Thamara Caleño, and her children. Holt’s lawyers and family say he’s innocent. And an eyewitness to his arrest says he was framed — that the weapons, which are illegal to possess in Venezuela, were planted by police. “We’re convinced that Josh and Thamara are innocent,” said his lawyer, Carlos Gómez. Read more