Human Rights Watch issued a multimedia report today that shows the scale and brutality of violent repression of protests by Venezuelan security forces in recent months.

Since early April 2017, tens of thousands of Venezuelans have taken to the streets to protest the government’s growing authoritarianism. The government has responded with a brutal crackdown. Security forces have shot demonstrators at point-blank range with riot-control munitions, run over demonstrators with an armored vehicle, brutally beaten people who offered no resistance, and broken into homes of suspected opponents. The security forces have also arbitrarily arrested hundreds of demonstrators, bystanders, and critics and prosecuted them in military courts.Read more

The Secretary General of the Organization of American States (OAS), Luis Almagro, today designated the former prosecutor at the International Criminal Court (ICC), Luis Moreno Ocampo as Special Adviser on Crimes against Humanity.

The work of the Special Adviser will begin with analyzing, studying and debating the situation in Venezuela with all interested parties and as a consequence formulating suggested possible courses of action by the Organization.

Secretary General Luis Almagro said “the escalation of human rights violations in Venezuela and the systematic attack against the civilian population includes murders, imprisonment and torture, and it is evident in the eyes of the international community that we are in the presence of crimes against humanity. Venezuela ratified the Rome Statute in June 2000, and therefore the International Criminal Court (ICC) has jurisdiction over what happens there. It is our duty to explore the possibility that those responsible for these atrocities can be tried by the ICC.” Read more

Luisa Elena Castillo had always said she would never get a tattoo because she didn’t want to endure the pain. But when her brother Miguel was shot dead in May during protests in Venezuela against President Nicolás Maduro’s government, she had his name tattooed on her ribs.

Luisa Elena, 33, even picked the most painful spot – her ribs. That was where a lethal projectile entered her brother’s body and tore into his heart. Miguel Castillo’s name is now etched into her skin along with two angels and a baseball, because that was his favorite sport.

Dozens of other young Venezuelans have lost their lives on the streets since early April, the beginning of the revolt against Maduro, who they say is destroying democracy in the oil-rich country. Read more

Maduro had threatened to arrest the judges in a televised speech over the weekend, during which he also verbally attacked U.S. President Donald Trump and several Latin American leaders for their statements against Maduro’s plan to rewrite the constitution. Read more

NGO: 4,072 detained so far during protests in Venezuela

A count of detentions recorded during anti-government protests in Venezuela from April 1 to date has yielded the number of 4,072, including 1,007 persons who remain imprisoned, reported human rights NGO Venezuelan Criminal Forum.

Alfredo Romero, the NGO Executive Director, informed that 479 detainees have been brought in military courts.

Add to this number 444 people considered political prisoners, even though they were arrested before the beginning of the protests against the government of Nicolás Maduro. Read more

Since Nicolas Maduro assumed office as the president of Venezuela in March 2013, the situation in the Bolivarian Republic has gone bad to worse. While the country experiences one of the major both political and economical crisis of its history, Maduro clings to power. His project of constitutional reform to its own advantage and the summon of a constituent assembly expected on the 30th of July, has only been sparking things off. The president doesn’t benefit from the same popular support as his predecessor Chavez and the opposition, which received a plebiscite on the anti-Maduro referendum on the 16 of July, hopes for early elections.

The violence of the suppressions by governmental forces has also worsen. On last week, the government authorized the release from jail of an opposition leader, Leopoldo López, as a sign of calming down.

«The imperial right wing believes it can give orders to Venezuela,» Maduro said, «The only ones who give orders here are the people. This time next week [on Sunday, July 30] Venezuelans will be voting for a Constituent Assembly.» Read more

A Venezuelan violinist who has become a renowned presence at the front of the country’s anti-government protests has been taken to hospital during the latest violent clashes in Caracas.

Wuilly Arteaga is often seen playing his instrument among demonstrators.

«Neither rubber bullets nor pellets will stop us,» he wrote on Twitter, posting a video of his swollen, bandaged face.

Footage from Reuters news agency that was shot at the time Mr Arteaga was hurt showed police appearing to fire rubber bullets and tear gas, as some protesters advanced throwing stones and gas canisters. Read more 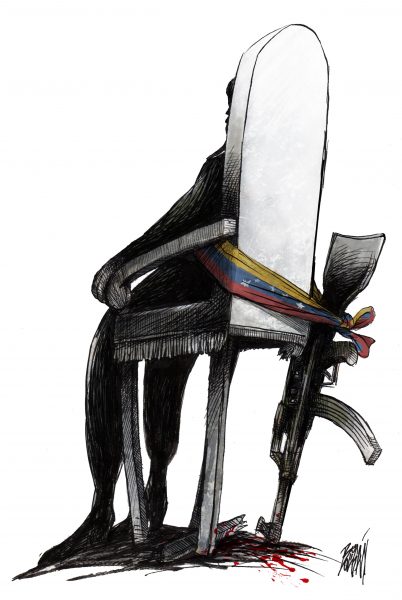