The UN has decried “widespread and systematic use of excessive force” against demonstrators in Venezuela, saying security forces and pro-government groups were responsible for the deaths of at least 73 protesters.

Presenting the preliminary findings from an investigation conducted in June and July, the UN rights office described “a picture of widespread and systematic use of excessive force and arbitrary detentions against demonstrators in Venezuela”.

The statement came Tuesday evening after the Venezuelan assembly declared itself superior to all other branches of government.

The top diplomats met in Peru’s capital to discuss Venezuela’s political upheaval. They expressed support for renewed negotiations between the government and opposition, though previous talks have failed.

The ministers represented Mexico, Canada, Argentina and other regional nations. But while many Latin American nations have denouncing embattled Venezuelan President Nicolas Maduro’s recent moves to consolidate power, the region has found it tricky to formulate a collective response. Read more

«They just brought Leopoldo home. We are working with more conviction and more firmly in order to find peace and freedom for Venezuela!,» his wife Lilian Tintori tweeted.

On Tuesday, Lopez and Antonio Ledezma — another opposition leader under house arrest — were removed by armed men from their homes after a controversial Sunday vote in Venezuela. Read more

«We are saying: Stop with this! Enough with the deaths, enough with the repression. It is not possible to inflict such torture on the people,» Brazilian Foreign Minister Aloysio Nunes said after the meeting. Read more

The Vatican calls on Venezuela to suspend its Constituent Assembly

For months, the Catholic Church has been taking on the Venezuelan government, chiding President Nicolás Maduro for his inability to protect his people.

Now, they’re ratcheting up the rhetoric. In a strongly worded statement, the Vatican’s secretariat of state made an urgent appeal to Venezuela’s leaders to suspend the new Constituent Assembly, which was seated Friday. That body, made up of government loyalists, has been given the power to rewrite the Constitution. Maduro opponents worry that it might also dissolve the country’s legislative body, currently controlled by the opposition.

The secretariat of state also warned that Maduro’s tactics are fomenting conflict and threatening the future of the South American nation. The Vatican has “profound concern for the radicalization and worsening of the crisis,” the statement reads. The government must guarantee “full respect for human rights and basic freedoms, as well as for the existing Constitution.” Read more

A musical voice of Venezuela’s resistance, silenced by regime

He has played his violin amidst explosions of tear gas. He has lifted spirits of countless marching protestors. He has faced lines of riot police holding nothing more than his bow and his fiddle.

As the political crisis worsens day by day in Venezuela, the forces of resistance have found an unlikely symbol in a slight-framed 23-year-old violinist named Wuilly Arteaga. Dressed in the colors of his country, he plays his violin at the front lines of pro-democracy protests, often floating, with a pure tone and a classical vibrato, the notes of the Venezuelan national anthem while armored vehicles fill the streets and fires rage nearby.

Yet as his public stature grew this summer, so did the danger facing him. His violin was destroyed. Read more

Venezuelan Regime Crackdown on Protests Has Left Over 100 Dead, 5,000 Under Arrest

The tactics employed by Venezuelan dictator Nicolás Maduro to repress protests against his regime have left 101 people dead and resulted in over 5,000 arbitrary protests, according to the NGO Venezuelan Penal Forum.

Since April 1, the NGO said more than 100 people have been killed by various law enforcement agencies, and thousands have been arrested during protests denouncing the country’s crumbling constitutional stability.

Alfredo Romero, the Director of the NGO, spoke at a news conference this week, during which he said 5,092 people were arrested during protests, 1,325 of whom are still behind bars with no hope for fair and objective due process. He said 626 people have appeared before military courts, and 389 have been sent to jail by the military. Read more

THE EDITORIAL BOARD I nytimes.com

Following a contentious vote on Sunday that effectively set Venezuela on the path to outright dictatorship, the United States has imposed personal sanctions on President Nicolás Maduro, putting him in the rarefied company of sitting leaders like Syria’s Bashar al-Assad, North Korea’s Kim Jong-un and Zimbabwe’s Robert Mugabe, whose rapacious greed for power has brought their countries to ruin. There is no longer any question that this is where Mr. Maduro belongs.

No nation should have to suffer such a leader. And Venezuela, with possibly the world’s largest oil reserves, had the chance to be one of South America’s leading democracies. But overdependence on oil has led to political and economic turbulence, which became disastrous when Mr. Maduro sought to emulate his left-wing predecessor, Hugo Chávez, with lavish public spending that falling oil prices and chronic mismanagement rendered unsustainable. Read more 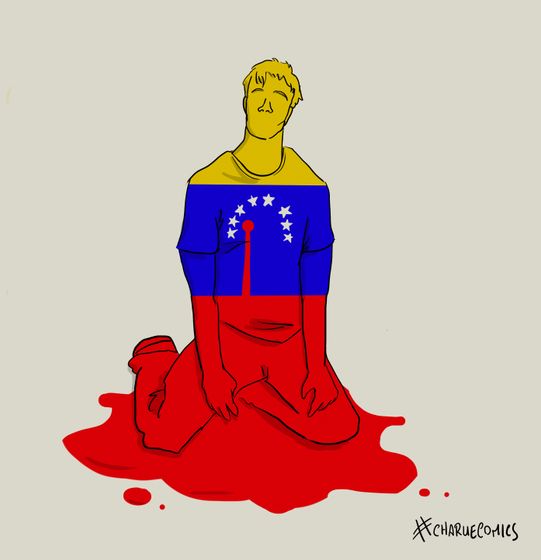