U.N. Cites Systematic Use of Excessive Force in Venezuela Crackdown on Dissent

The actions indicated «a policy to repress political dissent and instil fear», the U.N. human rights office said in a report that called for further investigation and accountability.

It called on the government of President Nicolas Maduro to release arbitrarily detained demonstrators and to halt the unlawful use of military courts to try civilians.

U.N. High Commissioner for Human Rights Zeid Ra’ad al-Hussein was asked whether the country was now a dictatorship. Read more

The Inter-American Commission on Human Rights (IACHR) expresses its deep concern regarding the acts of the recently constituted National Constituent Assembly (ANC) in Venezuela that exceed the powers of a constituent body and usurp the powers of the National Assembly which affects the separation of powers and a representative democracy. It is also worrisome the ANC’s discretionary power to dismiss and appoint any authority of the Venezuelan State, including magistrates and prosecutors, and to dictate and/or reform laws, and implement decisions without control of other powers and the necessary guarantees required within a democratic society. Read more

Venezuela’s opposition-led congress leaders met on Monday with French President Emmanuel Macron to press for humanitarian aid to their crisis-hit nation, on the first leg of a European tour seeking support against President Nicolas Maduro.

Maduro’s government has been criticised by the United Nations, Washington and other governments for failing to allow the entry of foreign aid to ease a severe economic crisis, while it overrides Venezuela’s opposition-led congress and jails hundreds of opponents. Read more

Yon Goicoechea: I Am in Prison Because I Want Freedom for My Country

I write this from my cell in the dungeons of the Venezuelan secret police. I’m 32 and I’ve been a democratic activist for 12 years. I have two children, 8 and 5, who are my sun and moon. I have a wife whom I love and who now has to carry the burden of being married to a political prisoner.

One year ago, while I was going to speak at a news conference on behalf of the Popular Will political party, of which I am a member, I was intercepted by 10 or 15 undercover secret police vehicles. A couple of dozen armed agents tied my hands and covered my head with a black cloth. They transported me to the prison from which I now write, where I was locked in a cell without light or natural ventilation. Read more 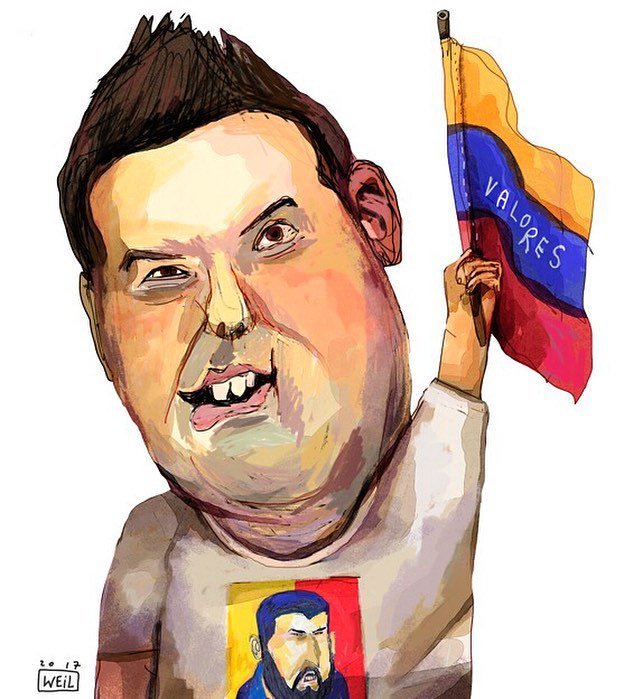 Activist Tintori says she is barred from leaving Venezuela

Human rights activist Lilian Tintori, the wife of Venezuela’s best-known detained political leader, said on Saturday she had been barred from flying out of the country and summoned to a court hearing over cash found in her vehicle.

French President Emmanuel Macron weighed in to say that Tintori was expected in Europe and Venezuela’s opposition should remain free.

At least 21 dissenting mayors have been punished in Venezuela

A total of 19 out of 76 mayors for the Venezuelan opposition coalition Unified Democratic Panel (MUD), elected in 2013, have been subjected to sanctions, detained or facing warrant of arrest, as instructed by the Supreme Tribunal of Justice (TSJ). In the meantime, pro-government municipal councils have dismissed two appointed mayors.

According to NGOs, such actions just mean political persecution by the Venezuelan government.

Back in 2014, during the protests throughout the nation against the government of Venezuelan President Nicolás Maduro, the first sanctions were imposed on opposition mayors, resulting in the capture of Enzo Scarano, of San Diego municipality, Carabobo state, and Daniel Ceballos, San Cristóbal municipality, Táchira state. Read more

People in Venezuela have a hard enough time paying for basic necessities like food and medicine, but now many are struggling to scrape together the funds for visiting relatives in prison — many of whom were arrested during protests against the dictatorship.

Family members of 11 students who were prosecuted by Nicolás Maduro’s regime in the city of Maracay said they have to spend said they have to spend 600,000 bolívares each time they visit, around US$33. That may not seem like a lot compared to other countries — where the inflation rate hasn’t surpassed 700 percent — but in Venezuela that figures represents nearly 2.5 months of minimum age earnings. Read more