Prominent Venezuelan lawmaker Freddy Guevara has sought refuge in the Chilean ambassador’s residence in Caracas amid fears he could be jailed, a development that leaves the ailing opposition with even fewer leaders to take on leftist President Nicolas Maduro.

Authorities had sought to remove Guevara’s congressional immunity so that he could be tried for instigating violence. The opposition and local media said that Sebin intelligence agents had surrounded Guevara’s house over the weekend.

Guevara, a 31-year-old who runs the hardline Popular Will party and is also the deputy leader of congress, entered the residence on Saturday and requested protection, the Chilean government said in a statement. Read more

Venezuela’s government has released two prominent opposition activists it has held for more than a year without trial, one of them a Spanish citizen, as President Nicolas Maduro looks to ease international pressure following months of unrest.

Yon Goicoechea and Delson Guarate were freed late Friday night from a Caracas jail, but continue to be bound by restrictions on their movement and speech, according to lawyers’ co-op Foro Penal.

Maduro’s government has been releasing about 15 jailed opponents per week since consolidating its power after the election of a constitutional assembly in July, according to Foro Penal. Read more

A Venezuelan journalist said Tuesday that he had been released following two days of captivity and torture after photographing criminal gang activities inside a prison.

«They tortured and threatened to murder me,» he said, adding that he will continue to report the truth in a fight to improve his country.

Medina reports for DolarToday, an anti-government website. Before he disappeared, both the website and the newspaper El Nacional had published Medina’s photos taken from a hilltop overlook purportedly showing armed inmates patrolling inside the prison along with marijuana crops, satellite dishes and a zoo. Read more

Join ViceVersa Magazine for “Bitter Laughter”, an annual event that analyses important issues affecting Latin America and Spain through the lens of art.

This year, Bitter Laughter will showcase the works of female cartoonists from Latin America and Spain. They will explore sensitive subjects, such as gender inequality and freedom of speech, with a pinch of humor inherent in political satire and cartooning.

Join Rayma Suprani from Venezuela, Martha Barragán from México, Nani Mosquera from Colombia, Ana Von Rebeur from Argentina, and Flavita Banana from Spain. The host of the event will be Bella Kogan, a Venezuelan writer, actress and Human Rights activist. Read more

Though the release of two prominent political prisoners in Venezuela was worthy of celebration for many opposed to Nicolás Maduro’s regime, hundreds of other still remain behind bars illegally.

Opposition leaders Yon Goicochea and former Mayor of the municipality Mario Briceño Irragory, Delson Guarate, were released this weekend. But according to the NGO Criminal Forum, there are more than 350 illegal detainees in Venezuela even after their release, and 27 others.

While the regime was releasing these two prominent opposition officials, it was already going after another one — Freddy Guevara, the Vice President of the National Assembly and Coordinator of the Popular Will party. Read more

THE ASSOCIATED PRESS I washingtonpost.com
November 2, 2017

A scrappy, independent newspaper in Venezuela that never shied from fights with the country’s powerful socialist leaders circulated its last print edition Thursday, but its staff of reporters and editors aren’t declaring defeat.

Launched in 2000 by a former leftist guerrilla fighter, Tal Cual will continue to tell stories of the country’s tumultuous times as an internet-only publication.

It’s 26-year-old editor, Luisa Quintero, said she views the changing platform as a reinvention — not a step backward. Read more 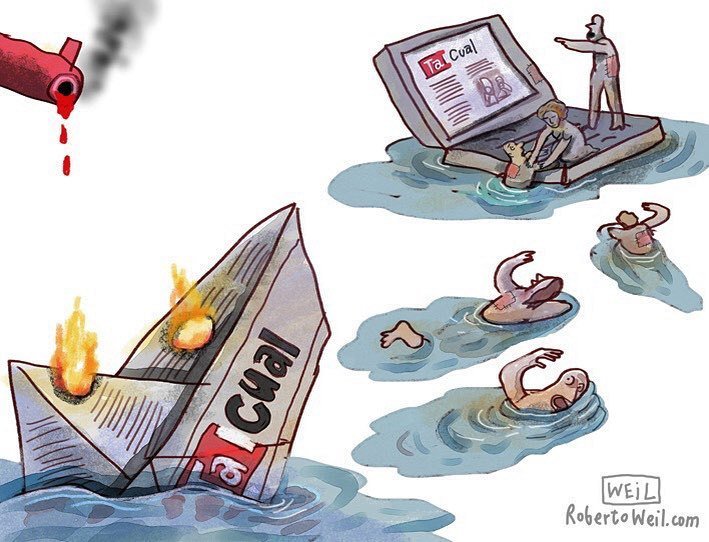