«We’re ending the strike, but our struggle continues,» Lopez wrote in a letter written from jail and read Tuesday by his wife, Lilian Tintori, to journalists in Caracas.

Lopez stopped eating in May, demanding that the government free opponents jailed during last year’s anti-government demonstrations and set a date for the elections that the opposition is heavily favored to win. The protest quickly reinvigorated Venezuela’s sometimes out-of-touch opposition, drawing the support of dozens of students who began fasting in solidarity with Lopez, who is on trial for inciting violence during last year’s protests. Read more

Brazilian senators seeking to visit jailed opposition leaders in Venezuela on Thursday said their minibus was stoned and blocked, forcing them to return to the airport.

The group of opposition senators had planned to drive from the coastal airport to the capital Caracas and then on to a military jail where hardline opposition leader Leopoldo Lopez has been for more than a year.

«Our bus was under siege; they were beating and trying to break it,» tweeted one of the senators, Ronaldo Caiado.

«I filmed them throwing stones against the bus.»

Letter from Leopoldo López “The Change Now Has a Date”

By LEOPOLDO LOPEZ I accionlibertad.org
June 23, 2015

Thirty days ago, together with my brother Daniel Ceballos, I assumed the responsibility of initiating a hunger strike as an expression of conscious, peaceful, and non-violent protest.

Our demands could not be more democratic: we asked for a fixed date for the elections with qualified international observers from the OAS and the EU and that these elections be conducted without political prisoners, censorship, and repression. The days have been slow and heavy, but fueled by our conviction in the reasons that led us to take up this protest. During these four weeks, we have made progress, but we have much more to do in this fight to reconquer democracy and finally lead our people along a path of peace, well-being, and progress.

Concerning the date of the elections, I only have to say with much hope: Venezuela now has a date for change. Also, I acknowledge the importance of the pronouncements of UNASUR, the OAS, and the European Union of their intention to participate as observers during the electoral process. We are thankful for these pronouncements that represent a clear commitment to democracy in Venezuela. Read more

Venezuela will hold parliamentary elections on Dec. 6, officials in Caracas said Monday, setting a date for a contest that will offer the country’s long-suffering opposition a chance to make its most substantial gains in more than a decade.

With President Nicolás Maduro weakened by sagging oil prices, a financial crisis and rampant crime, his opponents have feared the government would attempt to cancel or postpone the vote to spare itself an embarrassing defeat.

Maduro, the handpicked successor to the late Hugo Chávez, is not up for reelection until 2019. But if the opposition takes control of parliament, it would raise the chances of a recall referendum against him next year. In the latest public opinion surveys, Maduro’s approval rating is around 25 percent. Read more 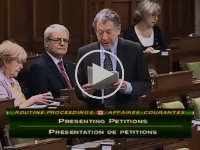 Irwin Cotler presents a petition about human rights in Venezuela

Jailed Venezuelan opposition leader Leopoldo López ended a monthlong hunger strike, his political party and his wife said on Tuesday, a day after the government met one of his demands by setting a date for congressional elections.

In a letter read by his wife Lilian Tintori at a news conference on Tuesday, Mr. López called the government’s decision on Monday to set an election date “a joint achievement” for him and 100 other hunger strikers who had joined him, many of them students. “All I can say with a lot of hope is that Venezuela now has a date for change,” he wrote in the letter. Read more

UN urges Venezuela to ensure independence of the Judiciary

The experts of the United Nations Committee on Economic, Social and Cultural Rights (CESCR) urged Venezuela on Monday to ensure independence of the Judiciary, specifically to stop labor instability of justice staff.

Venezuela was evaluated last June 2-3 by the Committee, and its recommendations were published on Monday.

During the public hearings, the members of the Committed had already noted an irregularity in Venezuela’s judicial system: most judges do not hold a permanent position. Read more

Secretary General of the Organization of American States (OAS), Luis Almagro, expressed satisfaction with the announcement by the National Electoral Council (CNE) of the date of the parliament vote in Venezuela.

The new secretary general who took office on May 26 offered last June 16 the OAS cooperation to facilitate dialogue between the Venezuelan government and the opposition, the call of the election within the scheduled timeframe and stability after the polls. Read more

What is Venezuela’s Government So Afraid Of?

A leitmotif of the Bolivarian government in the past 16 years has been to invoke the sovereignty of its people and non-interference in internal affairs, so it can evade observation by the international system with regard to any topic, including drug-trafficking, terrorism, the electoral system and human rights.

In spite of this, Venezuela today is perceived by nearly all international institutions as: 1) A country that protects drug-trafficking activities, which serves as a route for the transit of drugs to Europe and the U.S. 2) A country that hides and supports terrorists of FARC, ELN, ETA and other extremist organizations. 3) A country without rule of law, where electoral processes are little transparent and credible due to the lack of autonomy of the Electoral Power, a fact that weakens democratic institutions. 4) A country where the human rights of citizens are constantly violated, particularly of those who disagree with government policies, and fight for the rescue of democratic rights and freedoms. Read more

What a joke! Venezuela, a country facing severe food shortages where people have to make long lines in hopes of finding milk, flour or coffee, has just received an award from the United Nations Food and Agriculture Organization for its allegedly great success in combating hunger.

When I first read that Venezuelan President Nicolás Maduro was describing the FAO award as a historic achievement by his government, my first reaction was to think that Maduro was making this up.

After all, this is the president who has said he was communicating with late president Hugo Chavez through a little bird, and who claims that Venezuela. Read more 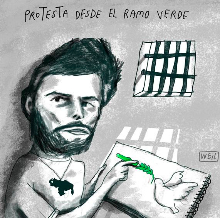