Thirty Venezuelan and international human rights organizations said that Venezuela failed to observe the International Covenant on Civil and Political Rights; therefore, they requested the United Nations Human Rights Committee to urge Venezuelan authorities to fully ensure the right to life, personal integrity, freedom of speech, and due process, among others.

In a communiqué aired on Monday in the context of the UN assessment of Venezuela’s observance of civil and political rights, the non-governmental organizations (NGOs) conceded that over the last years, the authorities have passed regulations and legal reforms in line with international laws on fundamental rights and liberties. However, they argued that these laws have not come hand in hand with actions to enforce them. Read more

Today, Venezuela will appear before the UN Human Rights Committee, which will review its compliance with the International Covenant on Civil and Political Rights.

The signatories to this public statement are all organizations that have submitted information to the Committee showing that, despite some progress in reforming the law, Venezuela has not fulfilled its obligation to protect civil and political rights and that grave human rights violations continue to be committed.

There are persistent reports of extrajudicial executions, excessive use of force, torture and other ill-treatment and arbitrary detentions. Read more

US senator on visit to Venezuela amid diplomatic detente

The Republican chairman of the U.S. Senate Foreign Relations Committee is making a surprise visit to Venezuela amid a U.S. effort to reduce tensions with the South American nation.

Sen. Bob Corker of Tennessee was meeting Tuesday with members of Venezuela’s opposition, said Maria Corina Machado, an opposition leader. She added on Twitter that she expected to meet with Corker in the coming hours.

It was not immediately known if Corker would also talk with President Nicolas Maduro or members of his government. But the visit follows several high level meetings between Maduro and U.S. State Department envoys since the socialist leader met briefly with President Barack Obama in April on the sidelines of a regional summit.

Corker’s office and the U.S. Embassy in Caracas didn’t respond to requests for comment. Read more

Venezuela to explain rise in crime and repression at the UN

Venezuela is to face on Monday and Tuesday its third and final assessment this year on human rights before the United Nations (UN). This time, a Venezuelan delegation headed by Attorney General Luisa Ortega Díaz will have to respond to questions regarding political and civil rights.

The Venezuelan authorities will have to explain the UN Human Rights Committee, in Geneva, Switzerland, why the annual homicide rate in Venezuela soared from 4,500 in 1998 to over 24,000 in 2014. Venezuela will also have to reply to complaints of torture and mistreatment occurred during repression on anti-government protests staged between February and June 2014. Read more 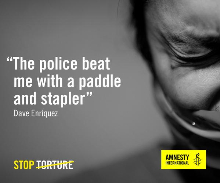 We need your support – Please, share the petition #LeopoldoLopez #PoliticalPrisoners

Once again we would like thank you for your support in signing the petition directed to the Secretary General of the OAS and UNASUR respectively, asking for their organizations to intercede in front of the Venezuelan government to authorize the humanitarian visit of the ICRC to Venezuela.

Our bother, Leopoldo López, after 30 days of holding a hunger strike as peaceful protest, lifted the strike once some of the demands made by him and Daniel Ceballos at the end of May, were met. Specifically, a date for parliamentary elections have been set for December 6th with the participation of international organizations as observers, as well as the liberation of some political prisoners. Sign this petition

A group of Brazilian senators has travelled to Venezuela to try to promote dialogue between the country’s government and opposition.

More than 40 people have been killed since last year in street protests.

Most of the senators in the delegation are close to Brazilian President Dilma Rousseff and support Venezuela’s socialist President Nicolas Maduro.

Last week, a delegation of opposition Brazilian senators said their bus came under attack in Caracas.

The group, which included former presidential candidate Aecio Neves, said it had to flee the country after landing in Caracas because their bus was stoned by government supporters. Read more 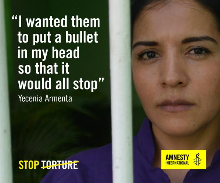 26 June: A Day of Global Action for Survivors of Torture

Over the past year, more than two million of us have told our governments to stop torturing – from Argentina to Australia; from Morocco to Moldova; from Poland to the Philippines.

And it’s working. Torture survivor Moses Akatugba was released from death row in Nigeria after 800,000 people in 118 countries around the world took action to save him. Claudia Medina saw false charges dropped against her in Mexico after 300,000 people around the world wrote to demand justice for her torture. And tens of thousands of us urged police in the Philippines to investigate the torture of Jerryme Corre; in March the police vowed to do so.

Together we celebrate each success, each step to justice. Together we can stop torture. Read more

In the end, over 100 Venezuelan citizens joined the hunger strike launched by opposition leaders Daniel Ceballos and Leopoldo López in solidarity, demanding the government end its harassment of dissidents, release all political prisoners, and set a date for this year’s legislative elections. Read more

Are the Bells Tolling for the Bolivarian Revolution?

Perhaps the most interesting paradox taking place during the three decades of Latin America’s democratization has been the rise (and potential demise) of Chavismo. After 15 years beating the drum for Latin America’s total autonomy from U.S. influence, the Bolivarian Revolution is facing fast deterioration, turning all of a sudden into an ancien regime. Created as a remake of 20th Century Latin American populism, its egalitarian rhetoric produced an immense fascination worldwide both in the progressive Left and among nations sharing an anti-U.S. sentiment. Today the improbable dream has become a bad joke, a mixture of economic chaos, rude military rule, repression, and corruption. Few of its promises and social gains rest on their feet today. Not even its self-confessed submission to the rags of the Cuban revolution has avoided the failure of the oil-fueled populist invention—especially after the U.S. finally realized that maintaining an odd Cold War with Cuba was close to insanity.

The political system set up by the unlikely genius of Hugo Chávez could be characterized as a hybrid between autocracy and democracy, a new form of autocratic regime born in the post-Cold War era seeking to preserve a certain aura of democratic legitimacy. Read more

Venezuela Sets a Date for Change

Finally: a ray of light in Venezuela’s ever-steeper, ever-darker descent into an inferno of repression and chaos. Yesterday the Venezuelan government announced December 6 as the date of the next elections to the National Assembly, after a delay so long that some surmised that President Nicolás Maduro had simply decided to violate the constitution and not hold them at all. Maduro had — and still has — good reason to fear the polls. His popularity is down to 22 percent, with his socialist party, the PSUV, garnering only 16 percent. The opposition looks set, as of this considerable remove, to win by a large margin.

What could have persuaded Maduro to take such a risk? One thing only: the imminent death in prison of Leopoldo López, the charismatic, 43-year-old leader of the Venezuelan opposition party, Voluntad Popular. Read more