Foreign senators to visit Caracas to learn about «humanitarian crisis»

Spanish senators Iñaki Anasagasti (PNV), José Miguel Camacho (PSOE), Andrés Gil García (CiU), and Uruguayan Senator Pablo Mieres (Partido Independiente) will travel to Caracas this week to voice their solidarity with leaders of the Venezuelan opposition who were banned from running for Congress in the upcoming parliament vote in December, and also to see first-hand «the humanitarian crisis» the country is going through, amidst food and medicines shortages, explained in a press conference on Tuesday the Executive Secretary of opposition umbrella group Unified Democratic Panel (MUD), Jesús Torrealba.

Along with Lilian Tintori and Mitzy Capriles de Ledezma, the wives of detained dissenters Leopoldo López and Mayor Antonio Ledezma, respectively, Torrealba informed that the group of senators will go, along with MUD leaders, to Ramo Verde prison, and the Helicoide, where several dissenters are detained. They will also meet with Antonio Ledezma, who was granted home arrest after undergoing a surgery. The senators will arrive between Wednesday and Friday, the MUD said in a communiqué. Read more

The Organization of American States (OAS) and the Brazilian Senate spoke up on Wednesday through their spokespersons on the attempt of the government of Venezuelan President Nicolás Maduro at politically barring the deposed deputy María Corina Machado. Both institutions lamented this new attack on the Venezuelan opposition leader.

Will Maduro pull nation back from the abyss?

By WILLIAM LUERS AND WENDY LUERS I MiamiHerald.com
July 15, 2015

The change now has a date” announced Venezuela’s young, charismatic leader, Leopold López, from prison as he stopped his 30-day hunger strike recently. The decision to end his protest — in which he was joined by 100 fellow strikers — was in response to Venezuelan President Nicolás Maduro’s statesman-like move to set the date of December 6, for parliamentary elections and to release several political prisoners.

Maduro considered his action as part of his efforts to engage with the U.S. government and the Vatican rather than a result of pressure from López and others.

Because of López’s courageous act, a virtuous cycle out of the desperate and dangerous pit into which Venezuela has fallen may begin. If Maduro is to pull his country back from the abyss of national collapse he needs to begin a new democratic process. That requires agreeing to a fair and honest test at the polls in December to allow for an open vote for or against constructive change. Read more

The U.S. Department of State this week honored a human rights activist jailed in Kyrgyzstan and a group of lawyers in Venezuela with its annual Human Rights Defender Awards, recognizing their work advancing human rights in the face of repressive government regimes. Within hours of the awards’ announcement, representatives of both nations denounced the choice of recipients, setting off diplomatic brawls between the U.S. and the activists’ home countries.

At a ceremony at State Department headquarters on Thursday, Deputy Secretary of State Anthony Blinken lauded Azimjan Askarov, an activist best known for investigating police brutality in Kyrgyzstan. Askarov is serving a life prison sentence after being found guilty of «inciting ethnic hatred» in a 2010 trial that human rights groups said was marred by serious irregularities. Read more 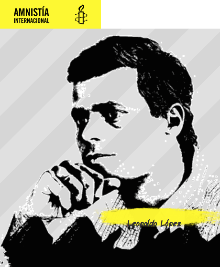 Former Venezuelan state Governor Pablo Perez said on Saturday he had been barred from holding public office for 10 years, the third ban on an opposition politician in the last week.

The comptroller’s office this week also disqualified former legislator Maria Corina Machado and ex-mayor Vicencio Scarano, both candidates in Dec. 6 parliamentary elections, from holding office. In their case the ban was effective for 12 months.

Critics says President Nicolas Maduro is seeking to clamp down on opposition leaders and discourage voters ahead of an election polls forecast his party is likely to lose. Read more

He said it all when he was first brought in front of a judge. Jorge Luis Leon had come to the site in his car with three friends, one of them a young girl. He parked at Pedro Gual Avenue, in the Venezuelan city of Valencia, and from there they walked to the El Trigal neighborhood to join a political protest. It was the night of February 13, 2014. At about 10:30 they watched in terror as a gang of hooded motorcycles and National Guard officers were storming toward them amid shots and tear gas.

The four youths ran trying to seek refuge inside the car, as if they had made it to safety in an armored vehicle. They soon realized they had not. A window was shattered by gunfire. The men in uniform opened the door and pulled them from the car. The guards threw the youths to the ground beating them pretty harshly on the face, kicking them repeatedly, butting them with their guns. At one point a soldier said: ‘Look how you’re setting fire to your own car,’ and the flames began to roar.

The Venezuelan Criminal Forum also reported that the guards stole their valuables (phones, money, and watches) and stripped them of their documents. «They were forced to lie stacked up in a pile on a Bolivarian National Guard truck. They were first carted off to the nearest National Guard post, and later to Detachment 24; at all times they were beaten and verbally and physically abused». Read more

Will the Government of Venezuela Ever Agree with the Words of Diego Arria?

Fedécamaras issued a statement containing «10 proposals to revive the economy of the country» from the capital of Lara state, Barquisimeto, where Venezuela’s largest business association held its annual assembly less than a week ago.

Ten reasonable and logical proposals for anyone who understands that without the contribution of the private sector, working in conjunction with the Government, it will be impossible to guide the progress and development of any country along the correct path.

There was nothing out of the ordinary in any of those ten proposals (at least not for any country with existing democratic institutions) and nearly all of them should be the objectives of a Government whose aim is the well-being of the population. Read more