One year. Such is the term given to the Supreme Tribunal of Justice (TSJ) and the Attorney General Office to take the necessary steps to «correct» the issue of provisional positions held by most of Venezuelan judges and public prosecutors, as an indispensable requirement to «ensure and protect full autonomy, independence and impartiality of judges and public prosecutors and ensure that their performance will be free from any kind of pressure and meddling.»

This is one of the 12 orders given by the United Nations Human Rights Committee to Venezuelan authorities in a final report issued on Thursday in Geneva, Switzerland, on the assessment of the status of civil and political rights in Venezuela. Read more

Venezuelan authorities on Thursday denied permission to a group of visiting Spanish senators to meet with a former mayor who is being held at the Sebin intelligence agency headquarters.

«We would have liked to be able to go in, since that is what we came for, but we’re not going to make any kind of criticism regarding the decisions (the authorities) are taking. We’re respectful. We came here with the intention of seeing Daniel (Ceballos),» Sen. Dionisio Garcia, a member of Spain’s governing Popular Party, told reporters.

Garcia and three colleagues – from three different parties – waited for two hours for authorization to enter the Sebin HQ in Caracas, but when that was not forthcoming they left. Read more

The experts drew attention to the systematical targeting of human rights defenders through the weekly TV programme ‘Con el Mazo Dando’, transmitted by the state network Venezolana de Televisión, including by disclosing and publishing personal information on their website. Read more

Spanish senators met on Thursday in Caracas with some of the victims of anti-government protests staged last year, and relatives of detained dissenters who were accused of stirring violence and plotting against the government of Nicolás Maduro.

«We have heard heartbreaking testimonies, very serious reports, and specially, an outcry from this important group of victims to put human rights defense on the international agenda,» said Senator Ander Gil, for PSOE, after meeting with dissenters.

The senators also said they hoped to meet with Ombudsman Tareck William Saab and the pro-government group called «Victims of the guarimba and continuous coup d’état.» Read more 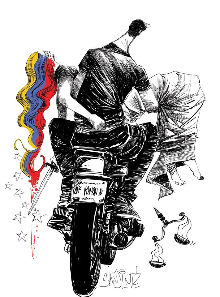 The sun cannot be covered with one finger, and neither can the breakdown of democracy and the violation of human rights in Venezuela.

Last week, the watchful eye of the international community gave two warnings on this disrespect for the basic rights of citizens by the government of Nicolás Maduro.

First of all, a group of experts of the United Nations and the Inter-American Human Rights System expressed their deep regret that a TV show aired by state-run television network Venezolana de Televisión (VTV) and hosted by Diosdado Cabello, the head of the Parliament, attempted to defame and intimidate the defenders of human rights. They specifically complained about three recent «unjustifiable televised retaliation incidents»:

1) The defamation of several human rights defenders and their organizations, before and after their participation in the hearings on Venezuela before the Inter-American Commission on Human Rights at its headquarters in Washington, D.C., in March of 2015. Read more

Spanish FM: «Venezuela has a long way to go in human rights»

The Spanish Minister of Foreign Affairs, José Manuel García-Margallo, stated on Tuesday in Madrid that Venezuela «has a long way to go in the matter of human rights, as many pronouncements issued by the United Nations have made public.»

The foreign minister’s remarks came in reply to criticism from Venezuelan President Nicolás Maduro of a controversial law on security and public order passed by the conservative government of President Mariano Rajoy, whom was labeled as an «assassin of the people» by Maduro.