Felipe González: In Venezuela there is vote, but no legitimacy of exercise

Former President of Spain Felipe González asserted Venezuela faces an institutional crisis. The State, he reckoned, only works to issue statements holding the other accountable for its failure; the National Assembly (AN) silences dissenters’ voices and does not carry out its essential function of controlling the government’s actions; while the justice system acts «following orders of the Executive Office or the congress speaker.»

«In Venezuela there is vote. But nothing else is fulfilled. There is not legitimacy of exercise,» González stressed on Friday in an article published on Spanish newspaper El País.

The former president added that the upcoming parliament vote opens a path of hope, as long as reasonable conditions are given to hold a fair election; however, he noted that the upcoming vote would not be enough to solve the current governance crisis in Venezuela. Read more

OAS to insist on electoral observation in Venezuela

The Secretary General of the Organization of American States (OAS), Luis Almagro, said that the body would continue insisting on acting as an observer in the parliament vote next December 6 in Venezuela. Almagro highlighted the importance of having a guarantor, due to «mistrust between the government and the opposition,» Efe reported.

«As in any election in our countries, it is a turning point, and that is why the process has to be as transparent and legitimate as possible,» Almagro added.

Venezuelan President Nicolás Maduro has rejected the OAS’ proposal to take part in the election as observer. Read more

The Inter-American Commission on Human Rights (IACHR) and its Office of the Special Rapporteur for Freedom of Expression express their deepest concern about the repeated stigmatizing statements and judicial harassment by high-ranking government officials of Venezuela made in recent months against the media outlets El Nacional, La Patilla,Tal Cualand their board. The IACHR urges the State to cease these acts of harassment that deepen the deterioration of the right to freedom of expression in the country and threaten media outlets and independent journalists in Venezuela.

When he handily won a primary to run for the National Assembly, Enzo Scarano hoped to be part of a wave carrying the opposition to a legislative majority that would alter the political balance in Venezuela.

But when a government agency stripped him of his right to hold public office, scuttling his candidacy, he found himself caught up in a different kind of wave — of government measures that appear aimed at weakening the opposition ahead of a make-or-break legislative election in December.

“It was a message to the Venezuelan people: ‘Look, we can do whatever we want,’ ” Mr. Scarano said of the move to bar him and at least eight other prominent politicians and activists from running for office. Read more

A Venezuelan artist is making a bold statement about queerness and art’s power to aid in the breaking down of stereotypes related to lesbian, gay, bisexual and transgender (LGBT) identity.

The «I’m Not A Joke» campaign from Daniel Arzola is a series of images inscribed with compelling truths about human diversity that encourages individuals to live as their authentic selves. He wants the images to eventually appear on buses and subways, exposing audiences to the realites of queer experiences in an attempt to breakdown prejudice in a form of activism that he calls «Artivism.»

Much of Arzola’s work comes from personal experience as an LGBT person growing up in Venezuela. «I had an violent adolescence because of [Venezuela’s intolerance],» he told The Huffington Post.» Read more 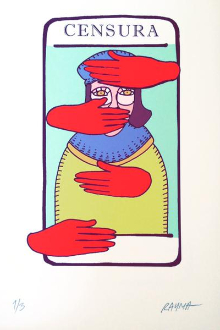