On Aug. 25 in Caracas, Judge Susana Barreiros announced the sudden and unexpected conclusion of judicial proceedings against Leopoldo López, the charismatic 44-year-old leader of the opposition party Voluntad Popular, or Popular Will, and the most highly regarded of Venezuela’s beleaguered opposition movement. Since surrendering to the authorities in February 2014, in the midst of widespread mostly peaceful protests against the socialist government of President Nicolás Maduro, López has been incarcerated in the military prison of Ramo Verde outside Caracas. The charges against him — arson, public incitement, damaging public property, and conspiracy — are all related to the demonstrations López was leading at the time. If convicted, he may face as much as 12 years in prison.

His conviction is almost certain. On Monday, Venezuela’s Public Ministry announced, to no one’s surprise, that the prosecution had proved its case. A formal verdict is expected on Friday.

López, although aggressive in rhetoric, has consistently advocated a lawful, orderly transition to democratic rule, in accordance with the Venezuelan constitution. Read more

A regional human rights court criticized Venezuela on Monday for forcing an opposition TV channel off the air in 2007 and told President Nicolas Maduro’s government to grant the broadcaster its old frequency.

The government of Maduro’s predecessor, Hugo Chavez, declined to renew a concession for the nation’s then-oldest channel, Radio Caracas Television (RCTV), on grounds it backed a brief 2002 coup and its frequency was needed for a public service channel.

But the Costa Rica-based Inter-American Court of Human Rights, which is part of the Organization of American States (OAS), said Venezuela should re-establish the concession and return assets taken from the broadcaster. Read more

BY HANNAH DREIER I usnews.com
September 4, 2015

The more-than-yearlong trial of Venezuelan opposition leader Leopoldo Lopez entered its final stages Friday as the defense delivered closing statements in a courtroom not open to the public or to journalists.

The hearing was delayed for hours as the court waited for one of Lopez’s four co-defendants, 19-year-old Marco Coello, to appear. In the afternoon, the Prosecutor’s Office announced that Coello caught a flight to Miami on Thursday. Read more

BY EDITORIAL BOARD I nytimes.com
September 2, 2015

Late last month, President Nicolás Maduro of Venezuela declared a state of emergency in areas that abut Colombia, shut down the border and ordered a mass roundup of Colombian immigrants. In a decree issued on Aug. 21, he warned that drug trafficking, contraband and rampant violence along the border made it necessary to suspend basic rights, such as public gatherings and demonstrations. After Venezuelan authorities evicted Colombians from their homes, some dwellings were marked with the letter D, meaning they would be demolished.

There was, in fact, no crisis requiring these extraordinary measures along the border, where Colombians and Venezuelans have coexisted amicably through good times and bad. The whole thing was phony, a crisis manufactured by an increasingly unpopular president who is desperate to shore up support for his party ahead of parliamentary elections scheduled for December. Read more

The Other Side of Leopoldo López

On July 27, 2015, Foreign Policy published a profile of Venezuelan opposition leader Leopoldo López by Roberto Lovato entitled “The Making of Leopoldo López.” The article contained numerous problems we would like to address.

Lovato makes it appear López may be guilty of serious crimes but fails to explain that the government in its own indictment acknowledges López wasn’t even physically present on Feb. 12, 2014, where the alleged arson and property damage occurred and where Venezuelan security forces opened fire on a few dozen people, killing three. Instead, the government claims that López used “subliminal messages” to inspire people to violence. Read more 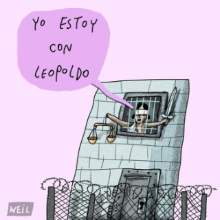