BY THE EDITORIAL BOARD I Nytimes.com
September 13, 2015

Upon hearing he had been sentenced to more than 13 years in prison on Thursday night, the Venezuelan opposition leader Leopoldo López extended his arms to a bailiff to be handcuffed. “These handcuffs will be removed by the Venezuelan people,” he said.

The outcome of the trial was unsurprising. The justice system in Venezuela has long been at the service of its authoritarian government, which has grown increasingly brazen in its efforts to sideline the opposition as confidence in President Nicolás Maduro has plummeted.

The charges against Mr. López, a Harvard-educated former mayor of one of the municipalities that make up Caracas, were scurrilous. Mr. Maduro ordered his arrest in February 2014 and charged him with stoking violence as demonstrations against the government were spreading. The government, in its criminal complaint, preposterously claimed that Mr. López had incited Venezuelans to violence through subliminal messages. Three students were also convicted of stoking violent protests. Read more

The baseless conviction of the opposition leader Leopoldo López and three Venezuelan students for violent incidents during the country’s 2014 protests exposes the extreme deterioration of the rule of law in Venezuela, Human Rights Watch said today. The trials involved egregious due process violations and failed to provide evidence linking the accused to a crime.

On September 10, 2015, a judge convicted López and sentenced him to 13 years, nine months, seven days, and 12 hours in prison for all the charges brought against him by the prosecution, including public incitement and association to commit crimes during a demonstration in Caracas on February 12, 2014. Three students whose cases were linked to López’s were also sentenced, two to four years and six months, and one to more than 10 years. López will remain in prison, and the students were granted conditional liberty. Read more

The 13 years and nine months prison sentence against a Venezuelan opposition leader without any credible evidence against him shows an utter lack of judicial independence and impartiality in the country, said Amnesty International.

“The charges against Leopoldo López were never adequately substantiated and the prison sentence against him is clearly politically motivated. His only ‘crime’ was being leader of an opposition party in Venezuela,” said Erika Guevara-Rosas, Americas Director at Amnesty International. Read more

BY EDITORIAL BOARD I Washingtonpost.com
September 11, 2015

We’ve often written about one-sided political trials, which appear to be on the rise as a means of repression in unfree countries that attempt to maintain a veneer of international respectability. In recent months we’ve seen journalists and political activists cynically railroaded to prison in Azerbaijan, Egypt, Russia and elsewhere. But for sheer brazenness, nothing quite matches Venezuela’s prosecution of opposition leader Leopoldo López, who on Thursday was sentenced to nearly 14 years in prison.

Mr. López, 44, is, like much of the opposition movement, a reason for hope in Venezuela’s future despite the country’s disastrous political and economic collapse under the regime founded by Hugo Chávez. A moderate leftist educated in the United States, Mr. López favors peaceful democratic change; in calling for anti-government protests last year, he gave several speeches calling on his supporters to act nonviolently. Not surprisingly, his popuarity in polls exceeds that of the current president, Nicolás Maduro, by more than 20 points.

The regime responded to Mr. López’s speeches by arresting him in February 2014, claiming he was responsible for clashes that occurred after a demonstration even though he was not present when they took place. Read more

Leopoldo’s Letter to the Venezuelan People

He who tires, loses and I will never tire of fighting for a free Venezuela!

More than a year ago, the corrupt elite that governs Venezuela ordered my arrest in the vain hope that I would flee the country. I chose to step forward, and present myself to the dictatorship in full view of the world. I made this decision without hesitation. I was prepared to confront the full weight of the dictatorship’s abuses. I was fully aware of what I was facing and the likely consequences. I was, and am, at peace with that.

Today, those consequences are a reality. I have been convicted by an elite that has demonstrated openly and brazenly that there is no level of dishonesty it won’t stoop to in order to preserve its power and privileges. Read more

Leopoldo Lopez, the Freest Prisoner In the World

BY YOANY SANCHEZ I huffingtonpost.com
September 12, 2015

I met him and it was impossible not to notice him. He stood out among everyone: young, with an impressive energy and an intelligence that suggested he would go far. Yesterday he was sentenced to 13 years and nine months in prison by a court as biased as it was malicious. On hearing the sentence I started to calculate how old his two children would be when he left prison, but I immediately stopped short. Leopold Lopez will not serve those years behind bars, I told myself, nor will he disappoint the first impression I had of him.

The authorities don’t learn. They don’t take into account that the bars magnify a political leader and the pain suffered in the cells hangs on his chest like a medal won on the bloodiest battlefield. Read more 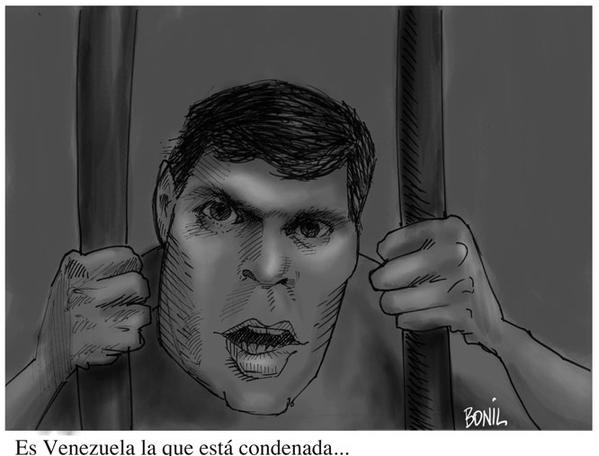