The Working Group on Arbitrary Detention of the United Nations Human Rights Council urged the Government of the Bolivarian Republic of Venezuela to proceed with the immediate release of Leopoldo López.

“The sentence was issued after a 19-month long trial conducted behind closed doors and marked by serious irregularities, when the due process and fair trial were not respected; the basis of the allegations were not published; the accused was not allowed to exercise his right to an adequate defence and the exculpatory evidence he offered was not accepted,” affirmed Mr. Seong-Phil Hong, the Chair-Rapporteur of the Working Group. Read more

On Saturday, opposition activists took to the streets in 29 cities across Venezuela, and 15 other cities abroad, to demand the release of jailed opposition leader Leopoldo López, who was sentenced to nearly 14 years in prison earlier this month.

The protests also kick off the opposition’s campaign efforts heading into legislative elections scheduled for December 6. If victorious in the election, opposition candidates have promised to pass an amnesty law that would release López and 77 other political prisoners from jail.

“The first law that we will pass is amnesty for Leopoldo López and political prisoners,” Henry Ramos Allup, leader of the Democratic Action party and legislative candidate in Caracas, said during the demonstration in the capital. Read more 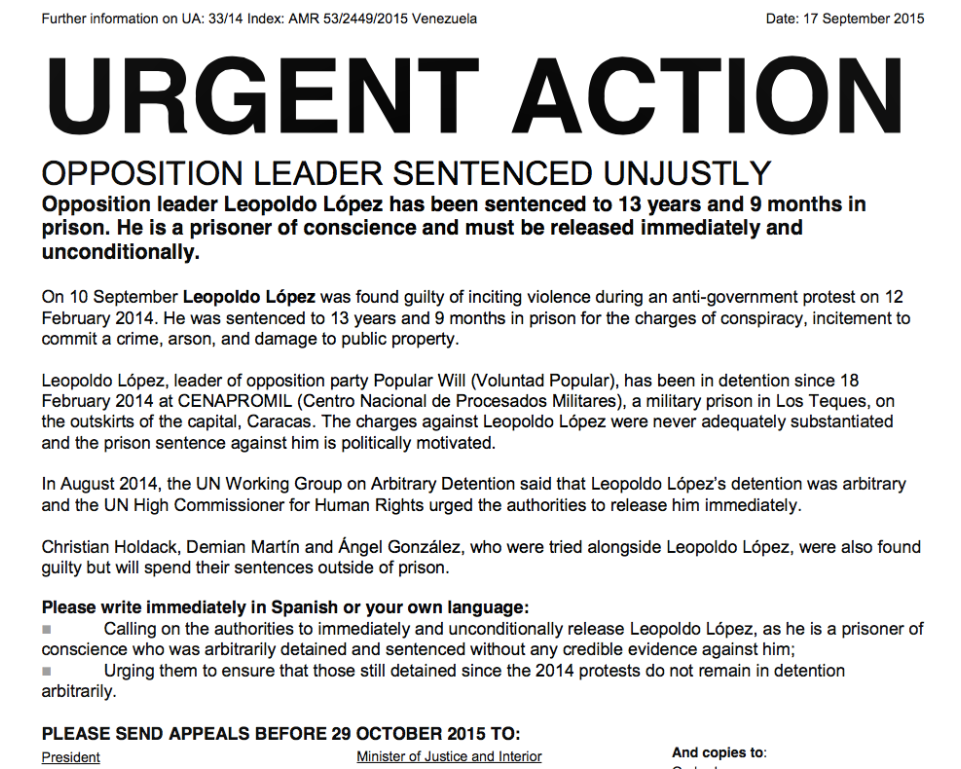 Amnesty International: Opposition leader Leopoldo López has been sentenced to 13 years and 9 months in prison. He is a prisoner of conscience and must be released immediately and unconditionally. Take Action

BY MAC MARGOLIS I japantimes.com
September 20, 2015

Deporting immigrants at rifle point, reigniting long-settled claims to a neighbor’s oil reserves, sending soldiers instead of groceries to depleted supermarkets — just when you’d think Venezuelan President Nicolas Maduro could go no further to turn his country into an outlaw state, the leader of the Bolivarian Republic has trumped himself — criminalizing dissent.

Technically speaking, Judge Susana Barreiros’s ruling was the act of the independent Venezuelan judiciary. Yet during the lengthy trial, Lopez, a 44-year-old Harvard-trained economist and former Venezuelan mayor, was barred from presenting physical evidence and allowed to call only two defense witnesses — direct violations of Venezuelan due process — and the media was locked out of the courtroom. Read more

The events that occurred the week of September 10 were a hard blow to the people of Venezuela. The injustice against Leopoldo López concluded with a prison sentence that condemns him to almost 14 years behind bars.

Yet López’s case was not the only difficult battle that week. The Constitutional Chamber of the Supreme Court declared that the ruling by the Inter-American Court of Human Rights (IACHR) in favor of Radio Caracas Televisión (RCTV) was “unenforceable.” There is no longer any doubt that there is no freedom of speech, nor respect for due process, in Venezuela.

Nevertheless, the Supreme Court’s verdict was not surprising, since they said the same of another IACHR ruling which called for protective measures for López and asked that the sanctions against him not prohibit his political candidacy. Read more 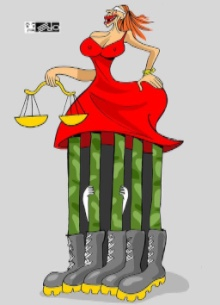