The Venezuelan government refused on Monday again a new offer from the Inter-American Commission on Human Rights (IACHR) to visit Venezuela and accused it of partiality in a public hearing opening the 156th session in Washington.

The representative of the Venezuelan government, Germán Saltrón, said that the IACHR may not visit his country insofar as it «will not rectify the mistake of having supported the coup against Hugo Chávez in April 2002,» Efe cited.

«To the extent that they do not meet such condition, they do not deserve to visit our country,» he affirmed.

In this way, Saltrón refused the offer made by the Special Rapporteur for Freedom of Expression, Edison Lanza, regarding a visit to Venezuela in order to confirm the human rights status. Read more

A political opposition leader who returned home after six years of self-imposed exile was arrested moments after landing at the airport Thursday and will face corruption charges, authorities said.

The arrest of Manuel Rosales, a former presidential candidate and former governor of the populous state of Zulia, threatens to further stoke tensions in an already polarized country ahead of the Dec. 6 legislative election.

THE ASSOCIATED PRESS I nytimes.com
October 19, 2015

President Nicolas Maduro has called for the prosecution of Venezuela’s biggest businessman for allegedly conspiring against his government in a phone call discussing a possible international bailout for the crisis-stricken, oil-dependent economy

Maduro late Sunday accused billionaire businessman Lorenzo Mendoza, president of the Empresas Polar food and beer conglomerate, of waging an «economic war» against Venezuela with the aim of surrendering control of the country to the International Monetary Fund.

The sharp rebuke was in response to a phone conversation aired on state TV last week between Mendoza and outspoken government critic Ricardo Hausmann, a Harvard University economist who suggested Venezuela needs a $40 billion IMF bailout to stem a deep crisis marked by triple-digit inflation, widespread shortages and an estimated 10 percent shrinking of the economy this year. Read more

Leopoldo Lopez’s wife, Lilian Tintori, and the parents of the imprisoned leader of opposition Voluntad Popular party (People’s Will), Antonieta de López and Leopoldo López Mendoza, held a brief meeting on Wednesday with Pope Francis in St. Peter’s Square in the Vatican.

Tintori said this is the second time she has talked with Pope Francis. She said she talked to him about the situation facing 78 political prisoners and their relatives in Venezuela. This time, Tintori gave the pope a letter written by her husband.

«I’m watching for this issue and I pray for him,» said Pope Francis, according to Tintori. Read more

World leaders of the Madrid Club asked the United Nations (UN) General Assembly to condition the renewal of Venezuela’s membership in the UN Human Rights Council to the release of political prisoners.

In a notice, they also linked the renewal to the acceptance by Venezuelan government authorities of an impartial mission of electoral observation for the next parliament vote slated for December 6, Efe quoted. Read more

On 6 December, Venezuela faces its most competitive election this century, and one that will play a crucial part in determining whether the country’s severe political, social and economic crisis can be resolved non-violently. For the first time since 2003, opinion polls show the opposition leading by around 20 points, putting it on course to take control of the 167-seat National Assembly. So concerned is President Nicolás Maduro at the prospect that he has threatened to take to the streets to “defend the revolution” if the opposition Democratic Unity (MUD) alliance wins a majority.

The danger is clear. Credible international election observation would help minimise the risk of a disputed result, but the government has once again refused to accept observer missions, dismissing them as a form of interference in its internal affairs. Instead, it will allow only “accompaniment” – a highly restricted form of observation which in the past has amounted to little more than an uncritical endorsement of the electoral authority (CNE). Read more

By SABRINA MARTIN I panampost.com
October 16, 2015

That is why she launched #LiberenALosPresosPolíticos (Free the Political Prisoners), a campaign that features all those who have been persecuted by the Venezuelan regime, but who time may have forgotten.

The Popular Will activist tells the PanAm Post that she wants to remind Venezuelans who the political prisoners are: their names, their cases, and how they arrived at their current circumstances. Read more 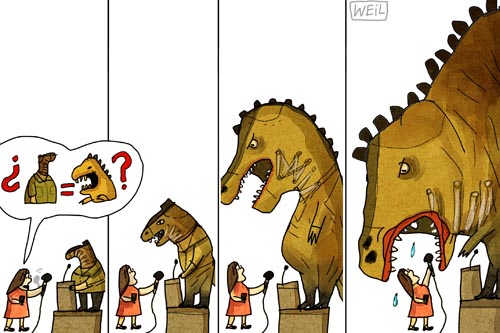